The volcanic island of Salina derives its name from a small coastal lake of about two hectares and only a few meters in depth, which was originally constructed by the Romans to harvest sea salt. Its ancient name was Didyme (Twin) derived from the dominating twin peaks of Monte Fossa del Felce (962 metres above sea level and the highest in the Archipelago) and Monte dei Porri called, by generations of pious persons, Monte Vergine and Monte Salvatore, in that order. Indeed, at the foot of Monte Vergine nestles the ancient Marian sanctuary dedicated to Our Lady of Terzito, pioneered by a Byzantine Greek hermit circa 300 AD and established by Papal decree as an official Marian Sanctuary circa 600 AD.
Salina has a surface area of 26.8 sq. Km. is the second most populous, and is considered the most fertile. In contradistinction to the other six islands which form one single commune under the jurisdiction of Lipari, Salina is divided into the three independant communes (Municipalities) of Santa Marina Salina, Malfa and Leni; a heritage of its vital bustling economy during the 1800’s. Viniculture has always flourished here with the production of red wines of high alcoholic content, ravishing bouquet and taste to the delicate, white, sweet Malvasia derived from the ancient grape variety “Attrio`” introduced by the ancient Greeks. Capers, from Salina, are still exported world-wide.
Because of its central position, Salina is convenient for excursions to all the other islands; whilst its efficient road network allows one to admire its verdant panoramic beauty either by bus, car, rented scooter, motorized tricycles and hiking.Leaving ferry or hydrofoil at the charming small port of Rinella with its small beach of fine black sand and immediate attendant facilities of a camping ground, hotels, restaurants and bars, one can admire the rich flora of broom, olive tree stands as one ascends to Leni (from “Lenoi” or wine press) and ever onward and upwards to the saddle between the two peaks to the vineyards of Valdichiesa (valley of the church} from whereon the vegetation changes to ferns and broom.
One can descend and, by taking an ample roadway to the left of the sanctuary either hike or drive to the top of Monte Fossa delle Felci to enjoy the most breathtaking views of the rest of the Archipelago and the mighty sentinel of Mt. Etna in Sicily. Continuing on one can turn left and descend on a dizzy zig-zag road down the inner side of what was an enormous crater to the serene and picturesque seaside village of Pollara, recently made more famous by the production of the classic film featuring Troisi in ‘The Postman.’ In the alternate direction one descends through the vineyards of Malfa and round the cape “Santa Anna’ to the more bustling, but nevertheless picturesque Santa Marina Salina, finally ending in the cul-de-sac Lingua containing the triangular salt lake. Alternatively, one can enjoy this panoramic journey by landing at Santa Marina Salina. The lodgings on Salina, guaranteed by this agency are second to none in the Archipelago. 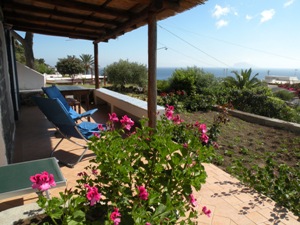 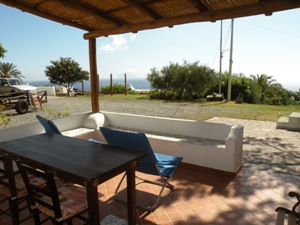 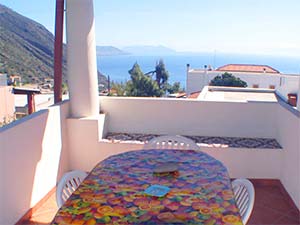 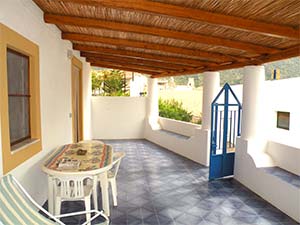 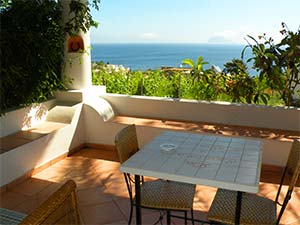