Vulcano, the nearest Aeolian island to the Sicilian Coast is, in turn, separated from Lipari by an 1.6 km canal. It has an almost oval shape, a surface area of 22 sq. km. and is divided into two principal localities: Vulcano Piano, which is cultivated (with an average altitude of 400 metres) hemmed-in by Mt. Aria and Mt. Saraceno; and, Vulcano Harbour, which comprises the southern part of the island and includes the the eastern (Porto di Ponente) and western (Porto di Levante) harbour. Of the three principal craters (Mt. Aria and Mt. Saraceno are extinct) only the Cratere Grande, which faces the east harbour, has maintained its intense activity to this day. This great crater has a circumference, at its base, of 7 km. and forms a cone 386 metres high, with completely smooth sides showing traces of alum and layers of pure sulphur.

As recent as 183 B.C, a small volcanic island rose out of the sea to a height of 123 metres and also formed an isthmus connecting it to Vulcano. This smaller formation is called Vulcanello and the isthmus by which it is connected to Vulcano gave rise, in turn, to Porto di Ponente and Porto di Levante. The former boasts a magnificent semi-circular sandy shore, whilst the latter is rich in sulphurous fumeroles scattered on the seashore and underwater. In a northward direction there lies a stretch of very fine black sand sloping seawards, upon which are scattered strangely shaped volcanic rocks giving rise to the imagination of monsters. It is no surprise that the area is called Valle dei Mostri (Valley of the Monsters).

The volcanic activity of the island in ancient times caused Aristotle to record: “The ancient Liparians, awakened by the loud noise and rumble of thunder coming from Vulcano, ad seeing flames issuing forth, imagined the smithy Vulcan, who manufactured the weapons of the gods and the heroes; whereupon the island was consecrated to the god of fire and it was named Hiera…” The whole island is a volcanic wonderland where one can bathe in warm gurgling waters all year round; immerse oneself in theureputic white volcanic mud, and avail oneself of every kind of amenity associated with the hospitality industry. The initial strong smell of sulphur dioxide, upon arrival, is soon forgotten in this haven of fantasy. 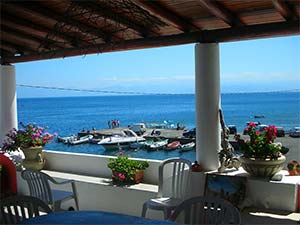 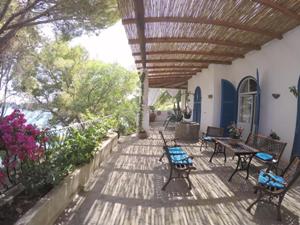 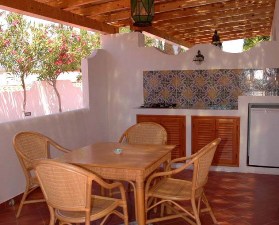 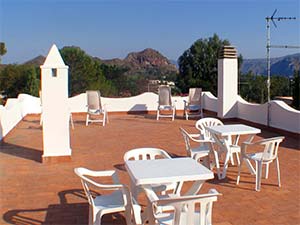