Stromboli is a volcanic island characterized by a unique intermittent explosive activity called Strombolian, because it differs from other prevelant active volcanoes. The island rises from depths which range from 1,100 to 1,200m with a summit 926m above sea level. 200m below this summit lies the actual crater with up to four active mouths, alternating with brief and violent explosive phases and the effusion of magma, which is channeled, quite safely down a slope called the Sciara del Fuoco, to the sea, causing columns of steam. The total activity offers an unforgettable spectacle, especially at night. However there have been apocalyptic eruptive explosions like that of 13th. Sept. 1930, that ejected enormous masses of lava endangering the two populated areas with an attendant tidal wave resulting in several deaths. This particular event inspired the celebrated film ‘Stromboli,’ by Rosselini.

The larger village of Stromboli, with a pier for ferry ships and hydrofoils, set off by adjacent black sand beaches, is populous and bustling. It occupies an ample seaside shelf rising some distance, steeply, up the side of the volcano. Guests of the numerous hotels, are transported upwards along the narrow streets on three wheeled transports converted for seating. Accommodation and dining establishments vary and accommodate all pockets. The village is dominated by the large recently renovated church dedicated to St. Vincent Ferreri, who, not surprisingly is a local patron guarding against earth tremors and volcanic eruptions. From the large church square excursions to the crater are organized mostly towards evening. Excursions by boat are organized from the beaches in the area of the pier and adjacent beaches, popular for bathing and taking the sun. A mile, seaward from Stromboli, a gigantic rock with the air and form of a squat medieval castle, with rocky walls falling sheer into the sea, rises to a height of 43m, surmounted by a lighthouse.

This rocky edifice, called Strombolicchio, presents a fantastic suggestive image especially by moonlight. Stromboli village has a general easterly aspect open to sunrise only. Ginostra village, diametrically opposite on the other side of the volcano, has a westward aspect where the sun sets and furnishes a glorious spectacle highlighting every other island in the archipelago. Ginostra is served by ferry and hydrofoil only with the intervention of a large connecting dingy with outboard that docks within a tiny inlet called Pertuso. From there, one ascends by foot upwards upon a zig-zag paved path to this most tranquil, idyllic, tiny village. Baggage and heavy goods are transported by mule, of which there are seven such active at any one time. Facilities are rudimentary and most accommodation is within the small original houses that are rented out seasonally. There is a bar and a well known and acclaimed restaurant open only during the high season, when it is often the practice to charter a boat from Stromboli, visit the Sciara for the view from the sea, dine at the restaurant and then return to Stromboli. Ginostra attracts a stream of visitors which return year by year and one must book in advance especially towards the climax of the high season. 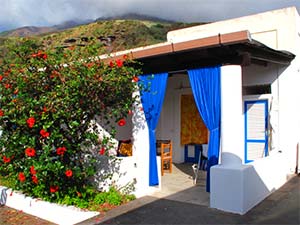 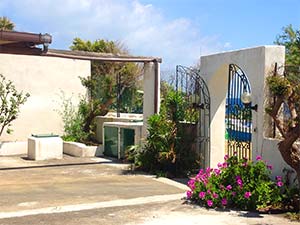